But How Realistic are Forecasts?

Note: This article was written in early November 2022 and first published in the January 2023 issue of The Truck Logger BC Magazine. Some updates from the initial article are included in this version.

North American and global lumber markets continue to struggle from soaring inflation, interest rates, and energy costs, resulting in eroding demand and consumer confidence. As 2022 wound down with more of a whimper, many wonder how tough it might be in 2023 and where lumber prices are heading.

Looking back and forward

In early September 2022, my outlook was for W-SPF prices to trade mainly between the mid-US$400s and mid-$500s until the end of the year before the real impact of a potential US recession hit, most likely in 2023-Q1. Between early September and early December 2022, W-SPF lumber prices have traded between US$365 and $520/Mbf, which was at the lower range of my early September outlook. Note: SPF prices were even lower at an incredible and unsustainable US$335/Mbf on January 6, 2023.

Trying to forecast commodity lumber prices is a minefield, as many scenarios, factors and assumptions must be incorporated. However, the range in lumber price forecasts, (as well as US housing starts) by forecasters always cover a wide range and it always amazes me how these forecasters keep their jobs despite being wrong so much of the time! I published quarterly lumber price forecasts starting in 1989 and then monthly prices from 2000 to 2020. My track record has been better than the analysts and economists simply because I have spent so much time in the field and at sawmills, where I have looked more at the supply–side dynamics rather than the demand–side, (which is where the others seem to be focused). However, the analysts and economists can never accurately predict housing starts (representing 35 per cent of lumber demand), so that is the start of their forecasting errors.

In looking ahead to 2023, my North America lumber outlook is on the pessimistic – and more on contrarian – side. However, I expect lumber prices will potentially rally through to the middle of first quarter, 2023 before slowing down. The reasons are many, but mainly due to building material dealers maintaining low inventories through the winter. When they start to order their lumber, it will likely be close to the same time and that will extend sawmill order files for several months and cause prices to move higher before they inevitably fall back.

The forecast is based on a rigorous analysis of sawmill costs as well as North America supply and demand, where US demand will be lower in 2023 than in 2022, but North American lumber production capacity will be even higher in 2023, from new and expanded sawmills in the US South that are in start-up mode. This extra volume will more than offset any curtailments or closures in BC Interior, creating surplus production. Offshore export markets are expected to disappoint in 2023, as there is no short-term appetite for increased volumes in all major importing countries.

Over the year of 2023, I expect W-SPF prices will be volatile at times. I initially thought that prices could range from below US$400 to as high as $600/Mbf, but as of early January, I believe that getting prices back to US$500/Mbf in the year is going to be challenging. Consequently, I expect the average W-SPF 2×4 price for the year to be near US$475/Mbf (FOB BC mill; US$300/m3; ~US$385/m3 delivered US east coast ports) for 2023; this is the contrarian view (higher or lower than consensus) that I adopted since the start of the pandemic, and this has been correct almost all of the time! 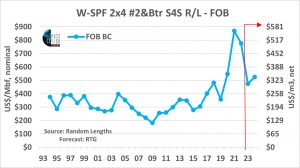 When I compare my (early November 2022) outlook to the forecasts of other forest products analysts, I was at the low end of the range of these forecasts: they ranged from US$475 to $595, with an average price of $523/Mbf for W-SPF 2×4 (FOB Mill).

And there are some absolutely wild forecasts out there for 2023-Q4 from some “algorithm-based” groups that bet on the Lumber Futures Market:

These forecasts are wildly different, which is why lumber forecasters can be hard to believe.

In the end, all forecasters, including myself, will be wrong, as the assumptions and drivers considered will always be changing, and you can only be lucky if your one-year forecast is even close to the actual. Essentially, lumber forecasters are placing an educated bet on their forecasts despite all the wild cards and unknowns ahead. In any event, my initial outlook was presented for readers of Truck Logger BC magazine (with further updates in early January).

BC Interior and Coast outlook

For BC Interior sawmills in 2022-Q4, most mills were losing money when lumber prices moved below US$500/Mbf in 2022-Q4; so far, prices have ranged from $365 to $470/Mbf and were at US$365/Mbf as of December 2; (and lower at US$335/Mbf (FOB BC mill) on January 6, 2023; US$216/m3) – at least $100/Mbf below breakeven levels. Government stumpage rates have dropped from their massive peak in 2022-Q3, providing some needed relief in 2022-Q4 and further reductions will occur in 2023-Q1 as the stumpage formula finally incorporates lower lumber prices from three to four months previous. I estimate BC Interior mill variable costs in 2022-Q4 at around US$450 to $500/Mbf and total costs another US$50/Mbf higher. This is why numerous BC Interior sawmills have been curtailing throughout fourth quarter and into first quarter 2023 as BC continues to be the highest cost producing region in North America due to its punitive (and market-lagging) government stumpage charges. In 2023-Q1, stumpage rates will drop further, lowering total costs and making mills more competitive with the rest of North America.

It is more difficult to evaluate BC Coast sawmills, as the species, grade of logs, products, markets and other aspects complicate any simple evaluation. However, if Western Forest Products’ results are used as a proxy for the Coast, their 2022-Q3 results were marginal (and deteriorating) after some great results earlier in the year. Not only are Coast mills facing a declining log supply, especially old- growth logs, there are high Coastal stumpage costs, weakening global wood products demand, a weaker Japanese yen (20 per cent since the start of 2022) plus high inventories, slow demand in China for logs and lumber, and slowing housing demand in the US. All these factors do not bode well for Coastal BC sawmills in 2023, especially in the first half. However, repair and remodelling activity is expected to be positive and that represents the highest volume segment of lumber use (40 per cent) in North America.

From the many ongoing government forest policy initiatives (such as old-growth deferrals, caribou protection, First Nations consultation, etc.) plus the impacts of beetles and forest fires, the BC Interior production continues to drop (and could be lower in 2023 than in the 1981-1982 recession):

For the BC Coast, the decline in total production has been even more severe:

With emerging government forest policies, high stumpage rates and eroding timber supplies, it becomes more obvious why outside (and many inside) investors would have difficulty considering BC for forest products investments.

Note: Originally written in early November 2022; prices updated to December 2, 2022, for the TLA article, with some further updates in early January 2023.